This is a poor photograph if a watercolor study that I started yesterday. I may or may not actually complete it, there are a number of technical and compositional errors. And, besides that, it's just a study--I wanted to know how this would look, if I put a bit more depth into the mosaic style I was working with last year.

There is a great deal of potential in this, and I suspect this will lead to another composition of a more complete nature in the near future. I may even get ambitious and take a better picture of this one.

Or. You know. Not. You can never can tell with me. Unending surprises around here...
Posted by Holly at 18:27 4 comments: sunday morning
Originally uploaded by oferchrissake
With photography, there is a persistent problem with how it can be art. In a sense, photography is no more artistic than meeting notes--it's documentation of event(s), and can be just as plain as text. On the other hand, there is the idea that the photograph is inherently visual art, because it evokes time and place, action, stasis, and emotion. There is a story told, or intriguingly not told, with any image. Photographs are no more "true" than any other first-person account, and yet they're regarded as more valuable evidence than the expressed memories of a human brain. A photograph is not a painting, or a drawing, and yet offers the expressive qualities of both. It's a kind of printmaking, but somehow regarded as a less venerable tradition. New money, not to be relied on or accepted fully into society. And yet, it is money, and makes its own society.

So, is this photograph of red underpants on an asphalt sidewalk Art? Is it documentation? Is it true? Is it suggestive, does it tell a story? Is a single such photograph trivial, while a book of photographs of underwear on the ground becomes an epic? Where would the line be drawn? 5 photos? 10? 100? Is there no limit to the number of photographs that I could make of this theme that would turn it into an artistic statement? leafingout
Originally uploaded by oferchrissake
Posted by Holly at 21:02 No comments: coffeechino
Originally uploaded by oferchrissake
I'm a fan of subtle textures. I can stare for ages at patches of moss, or old brick sidewalks... or the foam in my coffee cup.
Posted by Holly at 09:58 1 comment: 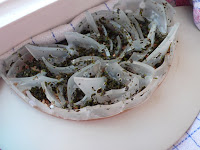 I am finally indulging my fascination with moss. Today I hot-glued broken glass to half a broken plate, and filled the spaces in between with starter moss. The glass is not frosted; it's been sprayed with a moss starter fluid that involves something like buttermilk, so it looks frosted right now. It'll get cleaned up later. The glass shards actually have very raw edges. Pretty sure hot glue wasn't the right thing, but it was the thing I had on hand.

The moss will eventually fill in and grow, as long as I remember to keep it damp. Since I grew this moss from a small dried chunk I found on the sidewalk a month ago, and still have enough left to grow more starter moss, I have some confidence that I might be able to manage this. As I told Regan a couple of days ago, unlike a lot of modern cultivated house plants, moss is a much older life form, and has seen far, far worse conditions than my attempts to cultivate.

There are other potential projects with moss in my brain right now, but I wanted to start with something that I wouldn't have to buy any parts for. I have a bag of broken glass and a glue gun, but most of my ideas revolve around carved designs in less delicate materials. We'll see what comes next, assuming I don't kill all the moss and/or lose a finger caring for the thing.
Posted by Holly at 17:56 2 comments:

Danielle sent me some stuff from my life-before-2D, and one of those things was a bundle with 4 panels of stained glass that I made a while back. It's not any kind of great composition, just a technical exercise, really. But it made me happy to see it anyway. Who knows, maybe it makes you happy to see it, too.

There is a 5 panel water color composition I've been working on. By working on, I mean, staring at in frustration. Friday I got frustrated by that, and decided just to set it all aside and do some painting. For want of a better plan, I decided to play around a little with the color qualities and pigment separation of some of my paints. So, I made a grid, with circles, mixed the paint, and painted.

I can't say it did anything at all to advance the 5 panel project, except that it diverted my energy, alleviated some of the frustration, and gave me a sense of purpose that consumed a fair amount of my time on Friday. I'm not totally clear how doing something more or less completely NOT the thing I was trying to do helped me, but I was satisfied with it, and I approve of feeling satisfied.
Posted by Holly at 16:32 2 comments:

Another foray into the world of making friends with new materials. This sketch was done with chalk pastels, with the basic pattern outlined in black ink. It was kind of fun, and I don't hate it, but I have trouble seeing how I'd execute a fully resolved image in chalk pastel. So far I've mostly been using the chalk pastels to add final accents over dry watercolors.
Posted by Holly at 16:26 1 comment: 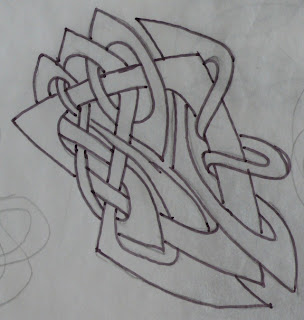 I used to work knots out that were symmetric in at least one axis. Lately, I've been more interested in free-hand designs, and when they're more formal, in different symmetries, such as 3 and 6 sections of a circle, and multiply symmetric with 4 or 8 blocks.

Also have been working on some variations on this theme that have the general composition characteristics, but with not so much of the formulaic/formal execution of the knots. I haven't got pictures of most of these yet, because most of them are still in the stage of being ridiculously smudgey half-asstrophes on tracing paper. But eventually they'll turn into finished work of some kind, or at least completed line drawing patterns. 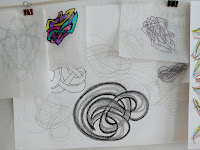 If you click this picture to the left, you can see some of the others, at least in part. The colored one is the same as the larger one (pictured above here), colored in with glitter gel pens. Which made me laugh. Because, you know. Part of me is still a 12 year old girl. Apparently it's the part that decides how to spend my allowance.

Man, stickers used to be really exciting! Those were the days.
Posted by Holly at 16:08 4 comments: 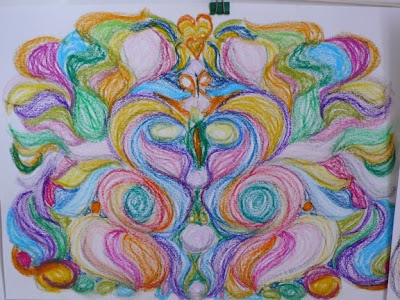 I'm trying to make friends with my oil pastels, because they seem like the kind crayons that I would like. The colors, the blending, the relevance to paint colors. Seems like a good way to make sketches for things I want to paint properly later on.

The problem is... I always hate new media. Almost always. I never hated metal or glass. But even new pencils are problematic for me at first.

Although this first picture looks kind of sloppy and disjoint, it has an alibi: The left side was drawn with my left hand, the right side with my right. I wanted to give both sides of my brain a little workout. There are only a few places where the two sides diverged significantly, and most of the size/shape/angle differences I chalk up to the fact that I do have a dominant hand. 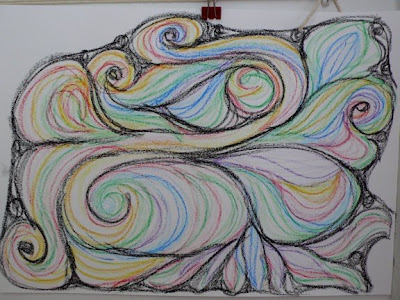 This is just more goofing with the oil pastels. I suspect this would look a lot better in paint. And I might try it sometime. Without all the white around the edges, though. It's pleasingly amorphous and twine-y.
Posted by Holly at 15:43 1 comment:

Really? More than a month? 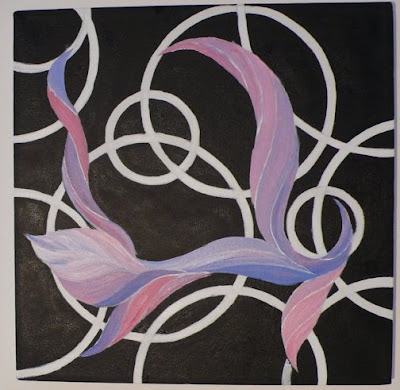 It hardly seems possible, but the numbers don't lie. More than a month has gone by since my last post here. I have been kind of busy with making things, since then. I've developed a (possibly unhealthy) obsession with putting moss on things. I've carved in plaster. I've painted, and drawn, and consumed lots of tea and coffee--a critical part of the creative process. And I've taken uncountably many pictures of my cat, which is my version of practicing portrait photography.

This picture is a smallish oil painting that I have started, but not yet completed. It's partly on hold because I'm not 100% sure how to proceed technically. The good news is, it is so far pretty much exactly what I had in mind, as far as composition and execution. This pleases me. I expect it will please me even more when it's finished.
Posted by Holly at 15:34 3 comments:

Shockingly spoiled, even for a cat.