It has been a while since I posted about that silly afghan, and I am happy to report it is more than twice that size now. I think I am within 5 squares of finishing it? Then I just have to figure out what to do with it.   ... and also with all the leftover bright colored yarns.

I have been working on wax models for metal casting, and will post some of those here soonish. And working on my life drawing skills. Can't claim I have become the new Leonardo BUT I am actually certain I am improving, which is a nice feeling. Someone actually complained that I made a drawing that looked too much like him!

But, the real reason I am posting now is that I have just ordered this:

... and am full of squee for when it gets here. Because, shiny! (Literally, went for the gloss finish.)
Posted by Holly at 06:27 2 comments:

Maybe I was just really disappointed that the world did not end back in December? Maybe I just Have A Problem with winter? Probably we will never know why there has been no blogging for three months, although most likely the fact that I find the term 'blogging' fairly distasteful, something I am supposed to do when I am not feeling well.

ANYWAY, there are a few haps happening.

Exhibit 1A: A Silly Afghan 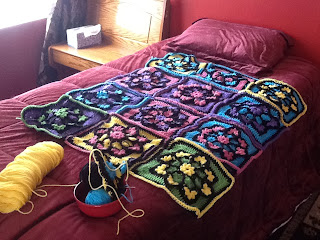 This is a work in progress, and although I expect it to become considerably larger, it is unlikely that it will get any less silly. Probably more so, if I had to guess.


I decided to work more on my life drawing skills, and last week picked up a cheap model at the hippie grocery store. (The flowers, I mean, what were YOU thinking??) I also have gotten much better about taking my sketchbook with me and sketching people and things and places when I am out in the world with a few minutes to spare. I often get busted drawing people, especially in restaurants, because I am the type to look at the subject a lot and the paper very little. Eventually I'll share some of my public sketching practice, but the pictures are all you get for now.

I also joined a newly formed Urban Sketchers group here in town. I have only made it to one of their meetings so far, but I think I will get to more of them as the weather for hanging around outside becomes more enticing. In two weeks, we're planning to meet up at the central transit center in town, should be interesting.

Also working on getting studio space in order in the garage. I think I'll need to start with electricity and insulation, and then ventilation, and then furniture. Currently I am using some large cardboard boxes as a make-shift workbench, and running an extension cord from the laundry room whenever I need juice. Of course, working in the garage is another thing that becomes more interesting as the weather improves, because that space is not heated. Signed up for some studio hours at the university metal studio, but have done very little there, so far. Ideas are pouring out my ears, but my time and their availability hasn't lined up so well, so far. I think that will change this week.

Enh, what else is going on?

Went to a lovely show at the Albuquerque Museum, Deco Japan. The link I'm giving is for someone else's exhibition of this show, which is a traveling exhibit. It maybe will come to you, unless it already came past you. If you're a big fan of deco style graphics and prints, the show has a tremendous collection of magazine covers, matchbook covers, songbook covers, posters, and adverts. If you're more into the functional and 3D stuff, they had some fairly nifty containers, screens, kimonos, and smallish sculptures. My personal favorites were the flying fish themed items. A quick image search on 'deco japan' will get you a pretty solid idea of what's out there.

Did a wee bit of gallery-crawling this past week. Revisited my fixation on Travis Black's watercolor images of birds. Was gifted a lovely print of one of the hummingbird images by someone awesome. (Squee!!) Failed to get into the local artist quonset hut, but I will. Now that I know they close at 3pm. (Who does that??) Tripped over work by printer / painter Diana Stetson, who has some extremely harmonious work. Definitely nature-oriented, but it is actually the compositions and executions which are harmonious to me. There were plenty of other interesting works to see in the world, and Mariposa Gallery in Nob Hill had quite a few. In addition to Diana Stetson and some other intriguing artists, Mariposa also currently has an exhibit hanging from Amanda Banker, who seems to have a bit of a fixation with animal-headed portrait figures. That show is worth it if only for the smoking-jacket three quarter posed octopus headed portrait. (Which does not appear on her website, by the way, so if you want to see it, you need to go there and see it!)

Is that all? Well, it has to be enough for now, I suppose. There will be more posts on all these topics, I suspect. Probably the next exciting thing is going to be a mechanical pencil review. If that doesn't strike you as exciting, this probably isn't the blog for you.
Posted by Holly at 00:05 1 comment: