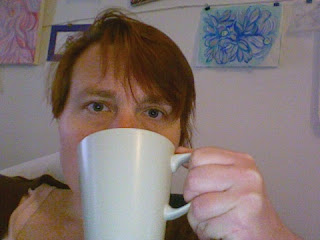 Waiting For Glue To Dry

Since I'm waiting for glue to dry in a non-euphemistic, non-metaphorical way, I thought I'd muse on some of the lessons I've learned from this project. It's not over, but since I just bribed myself to work on with an offer of a trip to the office supply if I finish it today, it must be close ('cause it's back to school sales time, squee!)...

One thing I've learned is, this is probably a prototype. I didn't start with a plan, I started with some nice plywood from the 50¢ scrap bin at the hardware store, and some shards of glass I'd painstakingly removed from a broken window here in the apartment. I had many different ideas along the way, and it moved forward very haltingly. And slowly. Part of the slowness was not actually knowing what came next, and having to have a good long think about that. I think the longest was almost a month.

If I had to build it again, by drawing a plan from what I've got now, and making a shopping list, and doing this like a proper project.... it'd most likely be a weekend project, or even just a day project, depending on what I chose to finish the wood / materials. I may test this bold claim. The closer it is to finished, the more sure I am that I can do better, faster, and with greater satisfaction at the end. I can't really 'save' this one, but I could go for a mulligan and be happy with what I get out of it. What I can't do it for is cheaper – this one is constructed almost entirely out of stuff I already had on hand, or clearance bin items. The only things I paid full price for were hardware (hinges, knob, latch).

Another thing I (re)learned is that prototypes are totally worth it. Although maybe next time I should do it in cardboard or something. In art we call that a maquette, or a 'mock up' if we're not being pretentious art school dorks.

Perhaps the most painful part of all this were the times I didn't have the right tool for something. Doing projects without a fully equipped shop can be fun, especially when you manage to work around a tool or process. A person can feel quite clever when Making Do. (See my contour gauge a few posts back...) but... it's those times when I'm mis-using a tool that I feel like ass. When I'm using a tool for something it was simply not intended for, and I know it. Or when I know without doubt that the problem I have can ONLY be solved by having the right tool, which I can't afford at the moment. Or that the problem I have can ONLY be solved by having a quality example of the right tool, which isn't in the stars at the moment. Those times are a bit frustrating.
Posted by Holly at 14:06 1 comment: 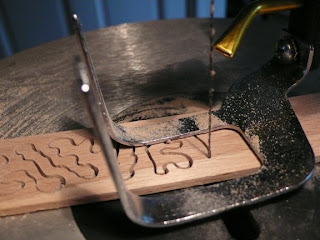 Today I replaced some set screws on my scroll saw, and set about cutting several meters of wobbly line into a one meter flap of hard wood.

It was kind of fun.

Tomorrow... less fun stuff. Finishing-up stuff. I spent way too much time today trying to get sticker glue off the hinges. And make the hinge screws work. The problem? They're a bit too long. Meh.

I say finishing-up stuff, as if I think I might finish this sumbitch some day. 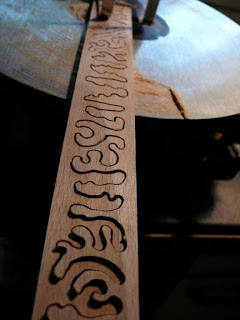 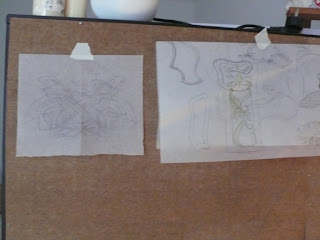 Check me out, two posts in one month! It's starting to get crazy around here! 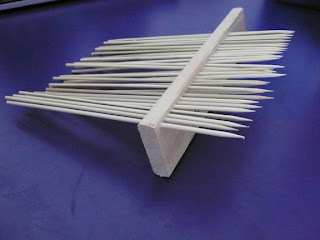 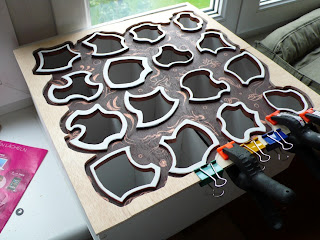 The formatting on these pictures is going to make me nuts if I goof around with it. So I'm not. Here's the rundown.

Couple sheets of paper with barely visible sketches... sketches for my next couple of projects. Hopefully those projects will be visible.

The re-do on the frame / edge. It took much less time than the first time, and is a thousand times better, but I'm still cross to have had to re-do it. Ahh, well. Live and learn. And re-do crap sometimes. 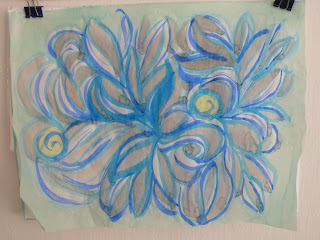 Quick watercolor painting to test out a brush brought from Beijing by a friend who visited there recently. That sucker can lay down some SERIOUS paint! Highly diggable. It will be my go-to brush of choice for watercolor tidal waves.

There will be more pictures when I have the front panel opening and closing and stuff.