The Time It Takes

Sometime last week, I accepted something that has always been difficult for me to accept. I accepted the fact that creating things takes time. Creating objects. Creating ideas. Creating skills. Creating mastery. Creating style, substance, philosophy, all that. Takes. Time.

I'm not one of those incredibly impatient people who starts spitting fire because the clerk is taking too long to say, "Good morning" or the elevator doesn't show up in 15 seconds. I'm just a victim of my own very active mind: I'm lazy. Even knowing how common that is, even knowing how I've been this way for ages, it's still taken me a long damn time to acknowledge that being lazy isn't actually the recipe for creating things.

Unless memory fails, it was Woody Allen who said, "Eighty percent of success is showing up." This strikes me as a bit more relevant then Edison's glib, "Genius is one percent inspiration, ninety nine percent perspiration."

Let me be blunt here: My brain is FILLED with brilliant ideas. I've had several ideas that would've made me rich if I had acted on them in a timely fashion, or indeed, at all. But I didn't. One problem is that I'm not motivated by money. I like recognition, although probably wouldn't want fame. Shit, I've had two nifty ideas since I sat down to write this post out.

Another problem is that I've allowed my social anxiety issues totally override my creative efforts. At times, it got to the point where I'd refuse to create anything, for fear of having to interact with people about that. Sometimes even acquiring materials for a project is stressful enough (in my imagination) to cause me to abandon the project. It's not exactly uncommon for creative people to be reclusive and weird about social interaction, but in my case, I've failed to be accidentally discovered, so either I need to push myself about this, or I'm going to continue not being recognized, and whatever I make will pile up in my house until I throw it out or am divorced. Making physical objects as art is much like breeding dogs... they're wonderful, but you can't keep all of them. You just can't. Either you let some go, or you have to stop making new ones.

This blog is actually a big step in the direction of connecting what I make with people who aren't me or living with me. Knowing people look at this kind of freaks me out, and it's almost exclusively people I know. Someday a stranger will look in here, and that will really be a new thing for me.

At the moment, I seem to be adequately medicated about my depression and social anxiety issues, and I'm hoping to get my brain rewired, so I will eventually be functional without the medications. And part of the chemically induced equilibrium is that I've become more productive and less fearful of what that could mean. For instance, although I'm still apprehensive, the notion of showing some of my art publicly isn't terrifying right now. And I've taken some very small, hesitant steps in that direction.

This all seems very obvious, and I've certainly observed some of these things in the past, but knowing a thing and accepting a thing are really not much alike. These thoughts are lending me a new patience, and a new motivation. In the past, I have gotten so frustrated and annoyed that I didn't have the skills to execute the brilliant ideas. I hated the fact that my work has often fallen far short of my vision.

Currently, I can see how not only are those disappointments and frustrations not a problem, they're actually a necessary part of the process of mastering what I do. They're something I need to look for, and do on purpose, instead of trying to avoid. The idea of deliberately seeking out annoyances to engage with is pretty goddamn foreign to me, but there it is.

Anyway, if you made it this far through all my poppsychobabble, here's a little reward for your patience. 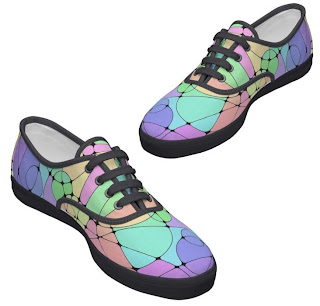 I like the white better, but I already said I wouldn't buy these.
Posted by Holly at 16:53 2 comments: 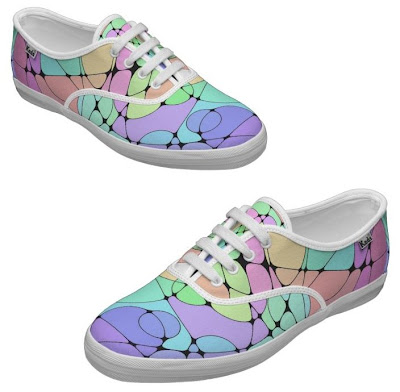 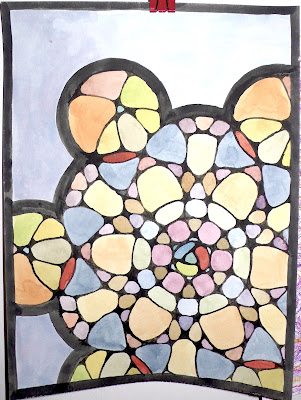 It's a little warpy, and maybe faded. It's almost 2 years old, and probably not handled well.
Posted by Holly at 18:15 1 comment:

This is the current in-progress painting. It's about 1'x3' or so, acrylic. I don't think it is anywhere near done, but this is the general idea. There will be a lot of detail in the spheres, if all goes according to plan.
Posted by Holly at 15:46 2 comments: