All the final pictures are up on the Flickr page, with descriptions of the various bits and bobbles. Here you see it hanging on the back of my bookcase. I was trying to find a suitably well-lit dark place to hang it, if you see what I mean. I broke my favorite portable bright light, so just running off to the bathroom and putting it on a towel hook wasn't in the cards. Oh well.
Posted by Holly at 13:04 No comments:

This Is How It Begins Candle Sconce Steps 1
Originally uploaded by Id Marks
I started a new project this week, in part to avoid post-partum depression after the tea chest, and in part because I have a HUGE list of projects backlogged (also, after the tea chest...). So, this one is small, but I thought I'd try documenting it pretty well. Looking over the pictures I took, it seems like there were a couple of times I thought, "This would make a great picture," but that was as close as I got to actually making a picture. Turns out, I still don't have that camera-eye. If you're Regan, you can just pull those images from my mind, probably. Everyone else, SOL. Sorry.

This project begins with the broken mirror from an old American Tourister travel case. (thanks, giant ridiculous cat...) And, some coffee. I wanted to make a wall sconce for a candle, and I wanted to do it without buying *anything*, so I was scrounging around for inspiration. And there was the broken mirror. Everyone makes candle holders that sit on tables and shelves, but tables and shelves eventually fill up with crap, or in my case, fill up with cats who are more than happy to knock my stuff onto the floor, whether it is burning or not. There is real appeal in being able to nail something high up on the wall!

Click through to see all the photos so far – about a dozen – with some explanation on each. The project is NOT finished yet, and I probably won't post again until it is. Should be soon, WARNING, that's the kiss of death right there, but when it is done, and I post again, that should be the rest of the photos, including the very first sketch, before I even thought of using the mirror, all the way to the last pic of the candle sconce on the wall with a burning candle in it and a frustrated cat, unable to knock it over.
Posted by Holly at 07:51 1 comment:

Well, then, that wasn't so hard, was it? 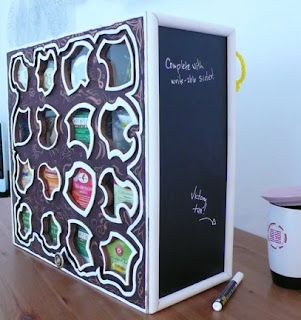 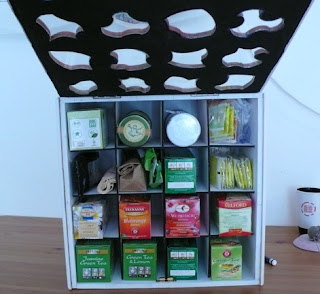 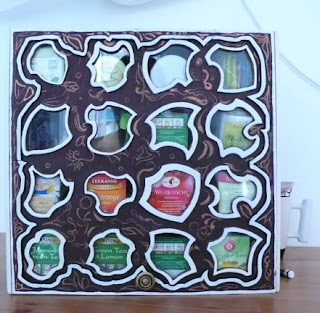 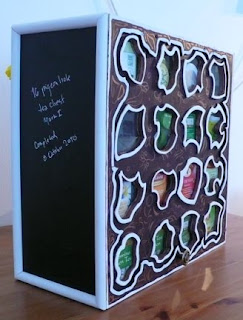 Also, still not finished with that project. Today might be the day, though. I think it's just down to fixing in those last 8 pieces of glass. You know, the ones that don't fit anymore? because the wood changed size due to moisture content, or paint, or whatever? Yeah. Those. Anyway. That.

While I'm all busy cursing about that, I'll leave you with this. In Vienna, Austria last week, there was lots of art-boggling, and a purchase was made of a fine art print from Michael Ferner. This is my second M. Ferner print, the first being the two koi print from back in January.

I am now going to point you to his web site. If you do nothing else, simply reload his front page over and over, because the images there are gorgeous. The dragons, the bamboo, the seahorses, the owl. These are some of my favorites.

This is a tiny image (from his site) of the print we bought in Wien last week. Never bought a print with a pedigree before! The print itself is largish, for us, anyway, 70cm X 150cm. It's going to look very, very cool hanging in our Laubengang, which is a long hallway thing, paneled entirely in wood, with windows and doors along both sides.
Posted by Holly at 10:57 1 comment: