Just read an article in Wired online about Christopher Conte, who makes good use of his skills as an artificial limb designer, artist, and sci fi fan. I dig it. It's not quite was elaborate or Victorian futuresque as I'd like, but hey, that's me. It's awesome nonetheless. Here is his actual web site.

That's Pretty Much It 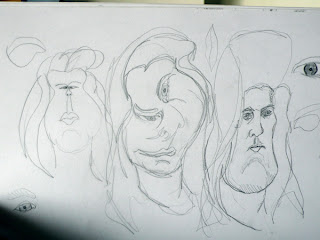 Self portrait sketches, after the style of the Mac OS X Photobooth application....
Posted by Holly at 08:34 No comments:

Where Are You Going With That? 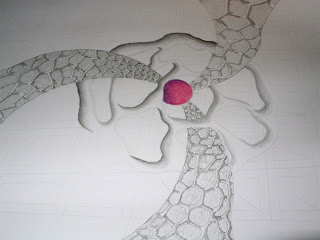 Sometimes I wonder what the various shapes and forms that plague me mean. And they do signify, one way or another. Would it take the fun out, to know what the story is? Would it add to the fun, to know where the connections lie? Who knows. Someday maybe I'll sit and think about it, and perhaps tell myself a satisfying story about that. Maybe I won't. There are definitely some strong recurrent images, themes, and relationships, not only in what I draw, but also with things I make in 3D, and in the techniques I prefer for making the magic happen.

Someone remind me later to put the quote from One Hundred Years of Solitude that basically sums up how I'd like my relationship with art to be. Unfortunately, I don't have time to dig it out right now, because I've got a class to get to. But it seems more or less relevant to the thoughts of the day.
Posted by Holly at 16:54 2 comments: 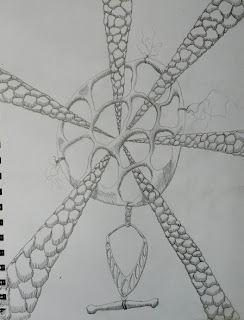 I've been thinking lately about the tension I feel between what's necessary for any kind of remuneration in the art world, and personal satisfaction as an artist. If you continue reading past that last sentence, please bear in mind that I know my situation is not the same as some other artists, and I'm acutely aware that my stuff isn't exactly going to win the Grand Prix. However, given that by any objective comparison, there is ample evidence to support the idea that my work is no worse, and substantially better than, much of what's for sale in the world. I could, in theory, be getting paid for this. At least enough to keep me in expensive papers and slick mechanical pencils.

What's needed to get paid for art is, in a nutshell, marketing. A person has to be willing and able to show their work to other people, and not only expect them to like it, but also expect them to want to pay for it. These things have historically been difficult for me, for a variety of reasons. I'm starting to get on top of it being OK to show my stuff to people, and I'm starting to be OK with the idea that some of them will like and possibly want to buy some of it. What's still troubling me is that final step about expectation, and the further bit about setting a price and collecting the money.

I feel dirty when I think about making art to sell. I don't know how to explain it better than that, but let's just say that whatever I make generally gets made because it seemed right, in the part of my brain that governs my sense of how the world should look. I can see that the perfect combination is to make stuff that appeases that part of my brain, and then package it in a way that sells. For instance, a scribble on a cocktail napkin looks like a scribble on a cocktail napkin... but if you have it professionally mounted and framed, it will then look like art... even if you don't LIKE it, you'll still recognize that it is an object that someone is trying to pass off as art.

So... when someone looks at something I've done, and says, "Oh, you could totally sell that" I am immediately seized with the urge to destroy it. Why? Who knows. I'm not sure that matters. But this puts me in a bit of a bind. Sure, agents and gallery representation is GREAT for people like me, because I don't have to get my precious psyche dirty. But in order to get an agent or gallery representation, I have to show it to someone, and I have to expect them to like it, and as soon as I start thinking about that, my brain seizes.

Probably my best bet is to stockpile a portfolio, and then get it all professionally mounted, and photographed, and then sucker someone else into showing it around. Preferably someone with style, and charm, and a general lack of scruple. I think that'd be worth a percentage.
Posted by Holly at 16:34 No comments:

It's not that I haven't been drawing or painting. I have. (Mostly drawing.) My brain seems to be chewing on some different directions to go in, and it takes a while to get from cocktail napkin quality drawings to something I'm even willing to waste digital camera memory on.

... and here it is: Something I'm willing to waste digital camera memory on. 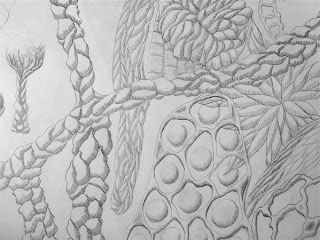 Nothing here particularly new, but it sometimes takes me a while to see what comes next. I tend to revisit and revisit and revisit until I like it, or until I get so annoyed that I shred the sketches and pretend none of it ever happened.
Posted by Holly at 16:29 No comments: