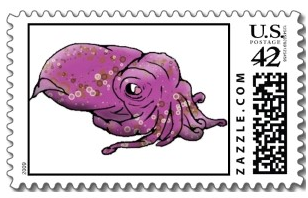 Here's another one. I'm so, so conflicted about this. On one hand, I love the idea of getting some of my designs out there. On the other, it feels kind of cheap. Not to mention my profit margin is crap. But it would be nice to get paid for my stuff, even if it's peanuts. But I'm not ready for the kind of mass production that means better margins. And I'm not really sure if I like the idea of going into mass production anyway. But, a creator getting paid for their work is pretty much my definition of a good thing.

Here is the link to the place where you can buy this postage. It comes in different denominations and sizes. This is real custom-printed USPS postage!
Posted by Holly at 09:52 3 comments:

Again with the print on demand squidmug
Originally uploaded by oferchrissake
You could have one these, too. You know you want one. It's what you've always been missing. 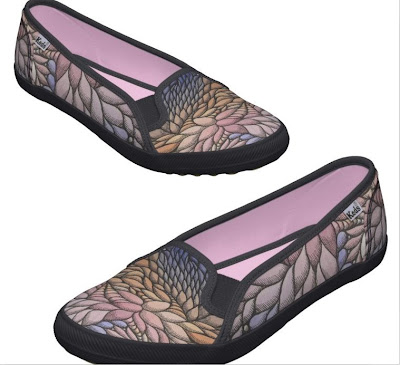 Souvenirs of a Gallery Visit 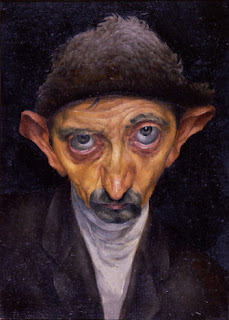 I might be making this up, but I think I saw all three of these pieces in the Leopold Museum in Vienna, in November. In any case, I was sufficiently impressed to write their names down, and I found that piece of paper today, and looked up their art, and still dig it.

This first one on the left is by Albert Birkle, 1900-1986. (There is a Wiki entry for him, but it's only in German. Let me know if you want more info from that.) An image search on his name will get you plenty of hits, but this is the one that really worked for me, Mann mit Pelzmütze (Mein Bruder Tier) -- Man with Fur Hat (My Brother Animal). I think I spent about 10 minutes staring at it. Not in the staring contest way, but just digging it. This is the kind of portraiture I like. Technically, it's probably cariacature, but for all I know, this guy really looks this way. I kinda hope so. 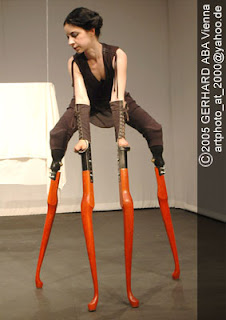 If you look out the right side of the aircraft, you'll see a still image from a performance by Lisa Bufano, photographed by Gerhard Aba. The work was entitled Charme des Makels (the Appeal of Imperfection). Bufano makes good use of aethetic movement (like dance, or swimming) and prosthetics to create fascinating work. Her web site has lots of good stuff, including some videos.

I know some people are going to be transfixed by this image by the "wait, is she an amputee??" factor. Personally, I'm transfixed by it because it is so elegant. The juxtaposition of body and furniture strikes me as full of grace, even though furniture and human bodies are completely in the realm of mundane everyday-ness. If her artist statement is anything to go on, Bufano herself may be somewhat struck by the freak factor, so it probably all works out in the end. 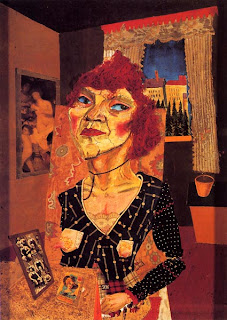 This last image is a collage from Rudolf Wacker, 1893-1939. It didn't stand out for me because of the aesthetics, but because it's so harsh. It's hard edged and very critical-seeming.

From my scribbled museum notes, I gather this is a portrait of someone the artist actually knew. It's not flattering, but I think it probably reflects very much on what the artist thought of this woman, and not so much on what she actually looked like.

The overall impression I get is, this is a woman he was afraid of, but also fascinated by. It's almost symbolic, as if he just free-associated a list of things he connected with Mrs. Klimesch, and then glued them all down on the page together.

Now, if you'll excuse me, I have to get back to staring at the man with the fur hat. I think he wants to tell me something...
Posted by Holly at 14:06 No comments: 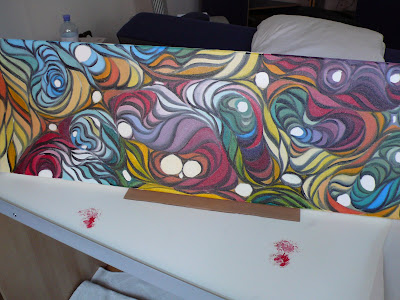 This is the thing the other thing was a sketch for. This is about 1' x 3'.

The cat is helping me with this one, as you can see. She's doing the red bits that don't actually go on the canvas.

I'm not totally sure I like the water-mixable oil paints. In theory they're easier to clean up than the traditional kind, but I find the fumes surprisingly irritating. I guess that's the trade-off? Irritating paint vs. irritating clean up? But... I spend so much more time painting than cleaning!
Posted by Holly at 10:24 1 comment: 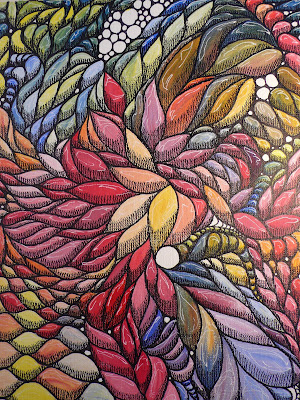 Yeah, I know, what's the point of posting pictures that aren't done? Especially as I'm the kind of slacker who is unlikely to actually post the finished thing. But at least I'm getting SOMETHING posted.

I thought I'd try acrylic paints on acrylic paper (instead of canvas, since I find my preferred acrylic consistency is somewhat too soft for canvas, as are the brushes I like to use), but after I started using the paper, I discovered that I'd picked up the only pad of oil paint paper from a stack of what was *supposed* to be acrylic paper. I'm still using it for acrylic, mostly out of spite.
Posted by Holly at 10:16 No comments:

Believe it or not... 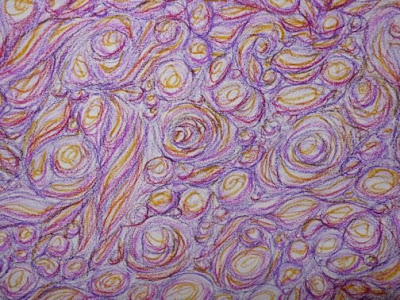 This is actually a sketch for a painting I'm working on. Doesn't look look much, does it?
Posted by Holly at 10:14 No comments: 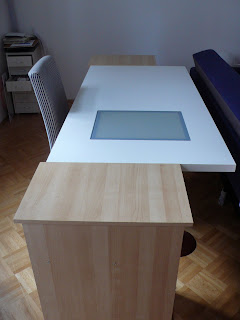 Sometimes painting or drawing at the household's only table doesn't cut it. So, I decided to get my own table, with hookers, and black jack. And, here it is: My very own custom tailored studio desk with side cars and a tracing window. It's not 100% finished, and I have not yet decided whether to attach the pencil tray to the near edge, where and how many lighting fixtures to put on it, or whether I should install a power strip directly & permanently in one of the side cars. However! Here's what I have done: