And then you threw an octopus at my window 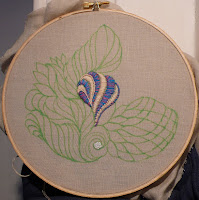 And here is the current work in progress. What is it? I don't know. I drew the design out, in a fit of responsibility/optimism. I started stitching in the middle, and plan to work my way out. I have an idea how the colors will go, and maybe the textures.

I'm sure there is too much to this design, and I might cut back on my plan to fill it all in (as I am doing with the bit that's already been sewn on), but who knows. The odds are pretty good that I'll get fed up with this and abandon it before it is done, as well. But for now I am quite hopeful, and some day would like to think of some more rewarding application and design for this stuff. Until then, I will be happily picking away at this hoop.

By the way, when I say I've been fixated with this, I mean just that. I've done almost nothing else for the past 3 weeks. Obviously this is a time consuming activity, and I'm probably slower than a person with more experience would be. Or, maybe the problem is that I go too fast and end up with mistakes and so on. I've never been one to let a little thing like that slow me down.
Posted by Holly at 11:14 8 comments:

The Little Gloves That Couldn't 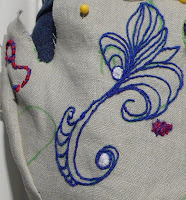 The thing about perfunctory research is that sometimes you begin the project and realize you're screwed. So it was with the gloves. Not only was my design for the gloves faulty in oh-so-many ways, but also, I kind of got carried away with the decoration on the gloves. The left on in particular. Also, the right glove. Oh well, it was fun anyway.
Posted by Holly at 11:09 No comments:

3rd Time, not the charm 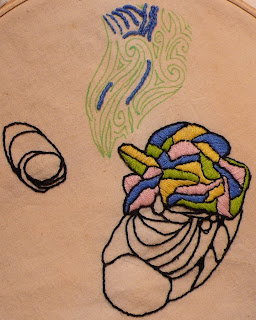 The lower/right was totally freehand, as was the black bit on the left. The green marks at the top (with blue stitching over some of it) are the design I thought I wanted, but after doing some with the blue, I realized the lines were far too close together, and I let it go as a waste of time and thread.

Also, I got the crazy idea that I would make a pair of gloves to wear while I work (on paper stuff) because I hate the feeling of paper on my hands.

... so this was left behind, and the gloves were started. After a truly perfunctory amount of research into the manufacture of gloves.
Posted by Holly at 11:06 No comments: 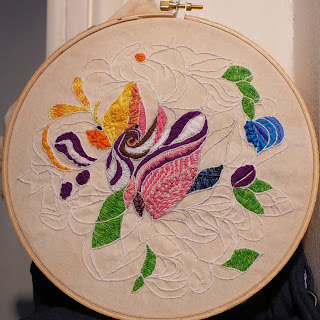 After that first set of stitches, I decided to do something a little more cohesive--a general design picked out in white thread, and then filled with a variety of colors and techniques. I drew a little bit of this with a pencil, which got graphite all over my white thread. After that, I just went totally freehand, sewing the design directly on the unmarked linen.

But then after many, many, many hours of poking away at this, I decide it might be a little too ambitious. Especially as my skills with certain more complicated stitch patterns were lacking non-existent.

This was abandoned in favor of a few smaller practice bits. Sometimes I get too excited about a new thing, and forget that I'm new to it, and don't need to shoot the moon the first time.

By the way, if you click through to the larger size of this picture, you should be able to enlarge it even more from there. Possibly to the point of too much detail. The yellow sort of diamond-shaped bit shows particularly well my lack of awesomeness at this point.
Posted by Holly at 10:59 1 comment: 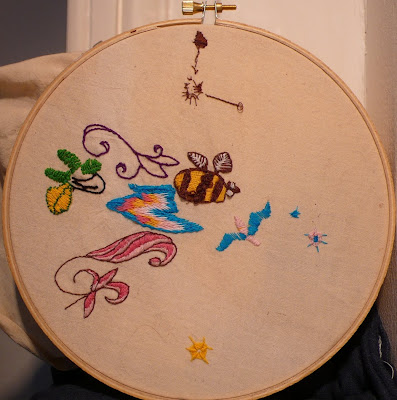 Sometime in the past few months, I got hooked on the idea that embroidery and other sewing-related activities might be fun and visually entertaining.

(In case you ever wondered, my Big Artistic Mission is "make stuff that is interesting to look at"...)

So, I picked up one book about embroidery, and was handed the book from a starter kit. Between the two, and an 8 hour transatlantic flight, I was able to pick out a few tentative designs. At the very top (12 o'clock position) are the very first stitches I made. It pretty much had to get better from there...
Posted by Holly at 10:51 1 comment: 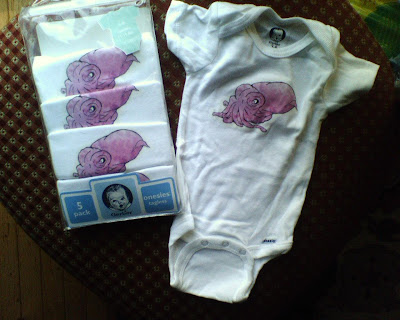 I hope the boy doesn't outgrow them before I get them into the mail...
Posted by Holly at 16:24 2 comments: